Cenderawasih Bay, Raja Ampat and Triton Bay are all part of the Bird’s Head of Papua– the epicenter of the Coral Triangle. It is the world’s most biodiverse marine ecosystem. Our guest for this safari is family with a sense of adventure that enjoys exploring the edge of the world from Alaska to Triton Bay. Triton Bay is part of Kaimana Marine Protected Area encompasses 6,000 square km (2,300 square miles) and is rarely visited due to its remote location. 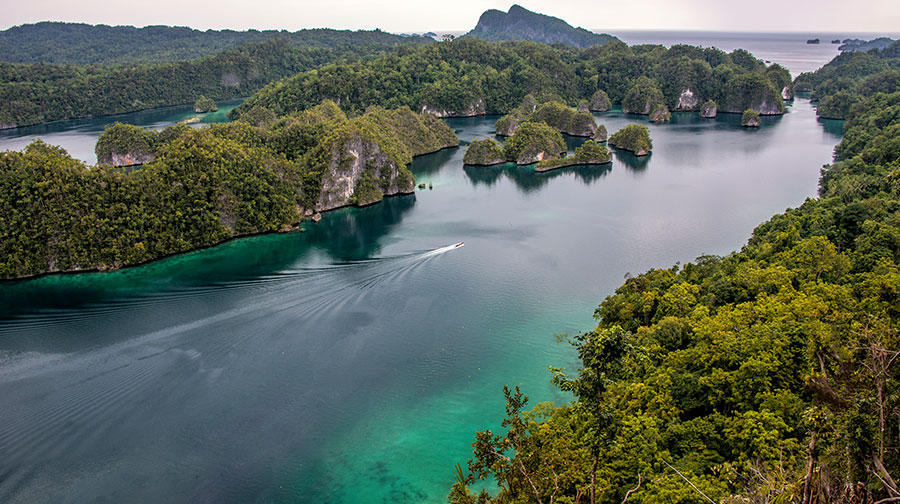 The shadow of 1000-meter tall peaks of West Papua Mainland welcomed us to the lagoon of Triton Bay. A new wooden stair-pathway has been completed and is now open to the public to be able to witness the green bay that divides the ocean from Aiduma to Namatote Island. We only wish that fewer trees were cut during the construction as it is home to birds that make trees their home. One can only imagine walking to the deep rainforest witnessing birds on top of the trees. If bird watching is your passion, the rainforest of Papua is home to more than 299 species of tropical birds. But be sure to spend extra days to witness something majestic, the lookout for The Bird of Paradise or Papuan Hornbill. The calm lagoon makes an ideal place for you to do on-the water sports such as kayaking, paddle boarding, water skiing and tubing. The pristine white sand beaches tucked inside the bays and/or between karsts islands have lots of coconut trees that make perfect shade for a picnic. 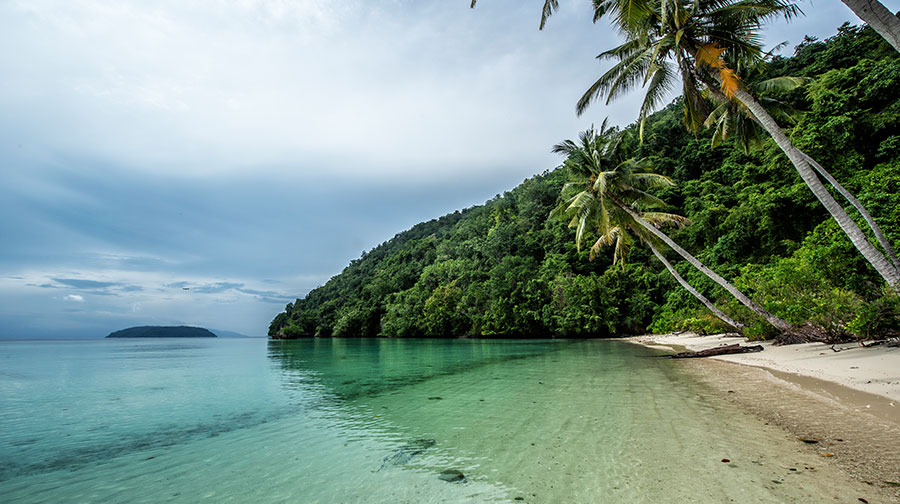 Triton Bay is known to several endemic species that are only found here. Some of its endemic species are flasher wrasse, dottyback, jawfish, damselfish, walking shark and the latest discovery of Parachielinus Nursalim. Triton’s reef developed into a crossroad for current-borne marine larvae originating from Banda Sea. Pushed by the shallow barrier of Arafura Sea, the eastern edge of these currents moves into Triton and Etna Bays. Another contributing factor is the tremendous volume of fresh water flowing from the Mainland of Papua into the sea. Most marine larvae cannot survive in low saline environment but here they survive and flourish. 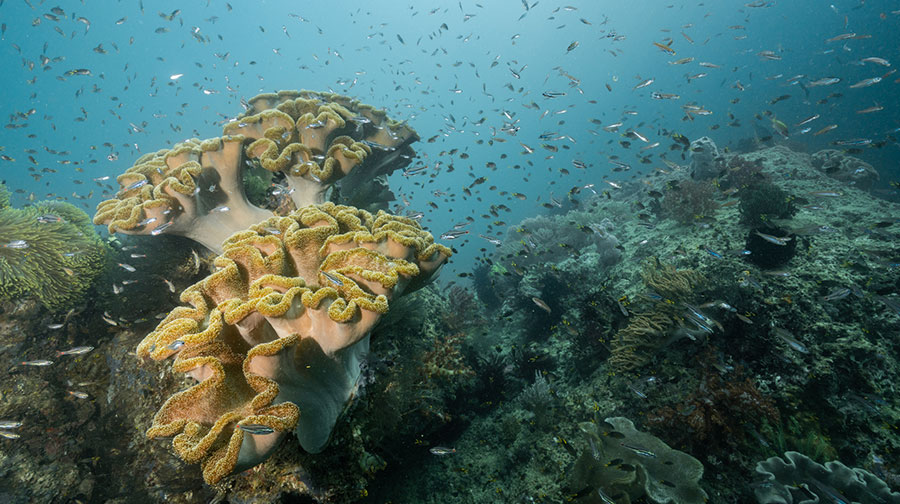 Our favorite endemic species is the lazy Wobbegong Shark. They might look like lumpy carpets, and be named after an unfamiliar Australian Aboriginal word (Known as “carpet sharks” because of the ornate patterns on their bodies. Wobbegong species include the spotted Wobbegong, and the floral banded Wobbegong. One species of Wobbegong, dubbed the Tasseled Wobbegong (and seen here), has a fringe of dermal lobes around its entire head, each of which is elaborately branched. Lying in wait on the ocean floor, the wobbegong can open its mouth wide and expand its throat to suck in crustaceans and fish as they swim by. How cool is that! 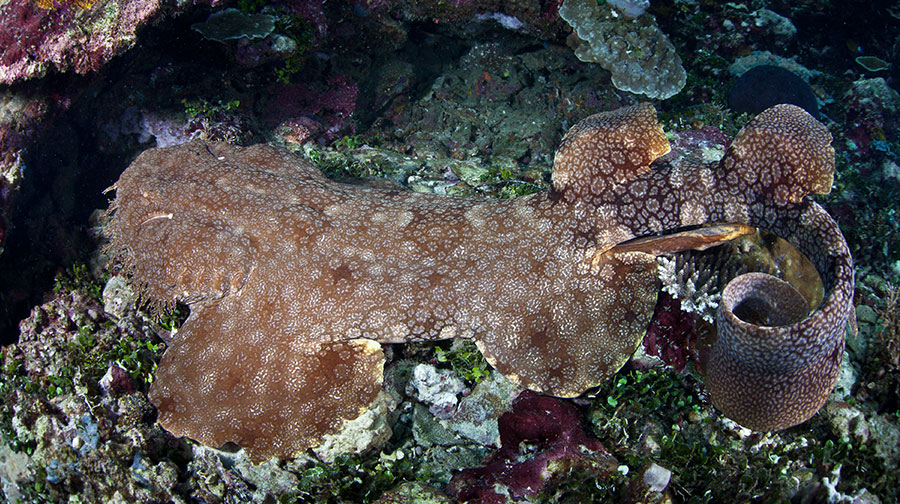 Imagine yourself submerge 3 meters underwater with the largest fish on earth, the Whale Shark that can grow up to more than seventeen-meters. Sometimes there are several Dolphins just below the Whale Shark and you can hear their high-pitched squeaks. After this once in a lifetime experience, you can visit one of Papua’s most impressive displays of ancient rock art by kayaking around Namatote Island. During a series of exploratory expeditions conducted by Conservation International (CI) and World Wildlife Fund (WWF) Indonesia, interviews were conducted with lift net fishermen in Kaimana (known locally as bagan). The scientists discovered that the fishermen were having almost daily interactions with Whale Sharks particularly as they as they fed them small baitfish or anchovies. “Some bagan fisherman said they did this because the sharks represented ancestors and brought good luck; others more pragmatically explained that, if the Whale Sharks congregate around their bagans in the morning, they are more likely to also attract Tuna, Spanish Mackerel and Sailfish,” observes Abraham Sianipar, a CI Specialist. 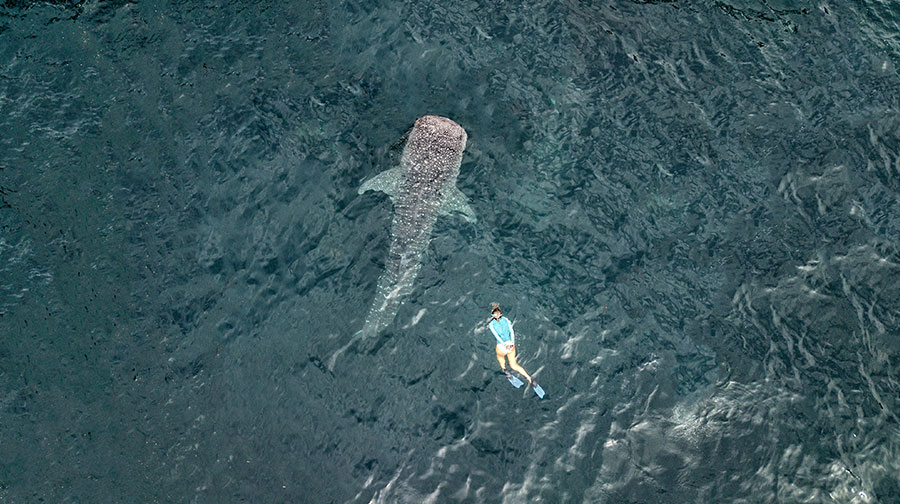 Our next destination was the remote island of Karas, Fak-Fak regency. It is a home to Turtles and Dugong. Here, it is possible to paddle inside Batu Lubang, a hole connected to the sea. A stark contrast of green vegetation and perfect white sand spoiled our eyes. Fruit bats also make this cave home. Only few people have an opportunity to enjoy undiscovered Triton Bay, therefore Begin your own journey!